Fiona & I in Segovia 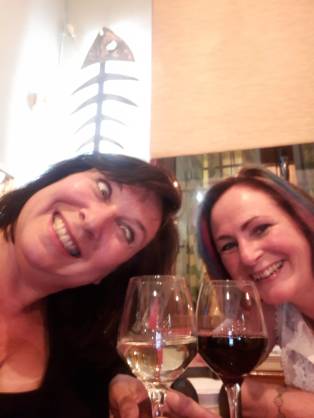 Fiona & I in Madrid

At Casa Halcon in May

The month is already over – it went so fast, so much has happened. Apart from guests coming and going and our little dog family growing, we also had friends staying here and I went to Madrid and Segovia for four days, to meet my friend Fiona there.

The weather has brought us already temperatures over 30 degrees with night time temperatures also above 23 degrees, too much for a comfortable night’s sleep.

The strawberry tunnels in the area have been mostly taken down and the land is ready for ploughing. We have seen buses lining up to take the Romanian and Moroccan workers back home. This is a month earlier than last year. The strawberry originated in shady woodland of the northern hemisphere and so do not tolerate the intense heat that has descended upon us. My four plants have stopped producing and are shriveling up. I am not sure the plants will survive the heat of the summer like they would do in the winter, hibernating. I fear, I will have to replant as they have not produced runners and then also keep them under cover, against frost in the winter and the sun in the summer.

Our potatoes have produced a good enough crop, but again also have not flowered before the stalks died off. Obviously plants do behave differently when subjected to heat. My sunflowers and sweetcorn are growing and forming flowers but are stunted in growth. Again, it is the heat doing that. With courgettes I had absolutely no luck this year, even though In Ireland they never gave me trouble. You live and learn. I try to use mulch, died pulled weeds, to cover tender young plants to give them some ‘sunscreen’.

To my surprise the home-sown leeks and kohlrabi do not seem mind the heat.

Spain has much to offer and we have not seen the half of it yet. So I arranged to meet my friend Fiona in Segovia. I am proud to say this trip was solely conducted with public transport, which is really well organised and not pricey. The trip enfolded thus:

security before boarding train in Sevilla

Security on the high-speed train is tighter than when crossing the borders between France and Spain, or Spain and Portugal, which is nil, nada, zilch. My ticket was checked three times and all bags had to go through a scanner.

By car this would have taken 5.30-6.00 hours and up to 600 kms, depending on the route. But why bother, if trains and buses get you there in time, with great connections and air conditioning? 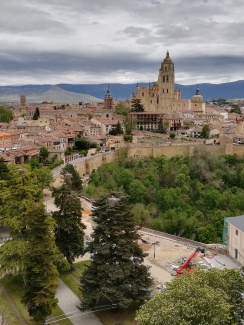 …IS BEAUTIFUL AND COLD and lies in city in the autonomous region of Castile and León. Well, to me it was cold anyway. I left Almonte in 26 degrees and sunshine and arrived in Segovia with 18 degrees, going down to six degrees at night, additionally it was overcast and grey. It is a lot farther north and is at 1,000m altitude, it is also close to several sky resorts, which explains a lot.

We had two nights booked and intended to do the full circle walking around the town to pick up on all the monuments. We did visit the castle and many many boutiques….

Between the first and second century A.D. the Romans built an impressive aqueduct (http://www.romanaqueducts.info/aquasite/segovia/index.html) which can be admired in the old town, which is also full of ornate churches, pretty medieval townhouses and at the other end of town the castle, or Alcazar, is situated that apparently inspired the Disney logo castle. 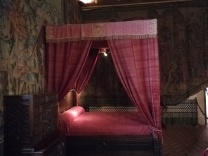 The castle is a gothic style jewel from the 12th century [see https://www.spain.info/en/que-quieres/arte/monumentos/segovia/alcazar_de_segovia.html] and sumptuously decorated. We’d walked around with craned necks to admire the ornately carved ceilings. The architecture that has been handed down from the Moorish occupiers concerns itself a lot with ceilings. Also walls are top to bottom decorated with stucco and tiles, often incorporating Islamic script, praising Allah. This style is, in my eyes, so much more uplifting and celebrating the gifts and talents that god-allah bestows on humans than the Christian churches could ever come near. 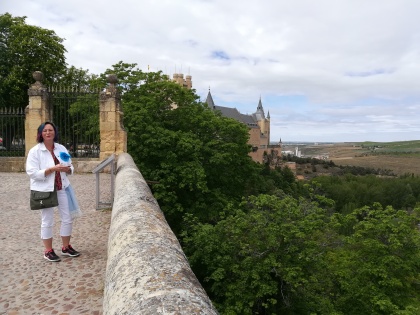 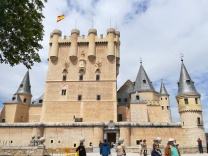 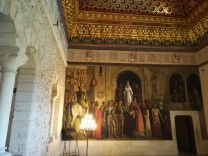 Fiona & I in Segovia

some of the gorgeous ceilings of the castle: 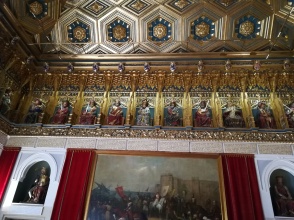 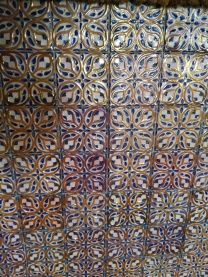 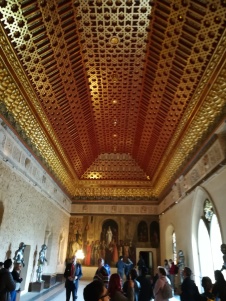 The castle, or fortress, was also a military school, which explains the tiny knight’s amours and different sized weaponry:

There is so much to feast the eyes on, that one castle a day is quite enough.

It was rather cool and shopping makes you warm, all this trying on of lovely frocks. It’s a nice town for that, as not overrun with people and we had peace and quiet selecting our rich rags.  We employed restraint and came away with a nice long black lacy dress for Fiona and I obtained white jeans adorned at the bottom, a colourful silky skirt, a t-shirt and some much needed undergarments. 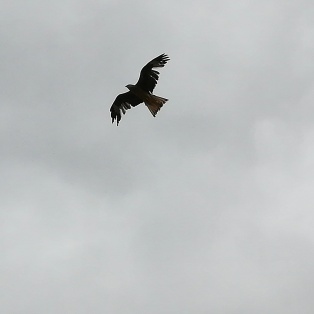 The other cultural thing we did was visit an exhibition in the Torreón de Lozoya, at the Plaza de San Martín. Simply because we had time and everything else was closed. The tower itself was unfortunately closed. One exhibition was about the Orden Espanola de Carlos III, with the portraits of members of the Orden and their costumes, the other was below and a modern photographic exhibition with black and white portraits and a video show of men’s faces, just coming from a shift from the mines. No words, no subtitles, no names, just dirty, dusty, tired honest faces. It was amazing what deep impression they made on us, how we were moved by the humanity shown. It was nearly voyeuristic just looking at their faces looking at us. The attending nice young man at the table upstairs filled us in on the background afterwards.

That night we had a horrible dinner consisting of deep-fat fried chopped up suckling pigs trotters…. 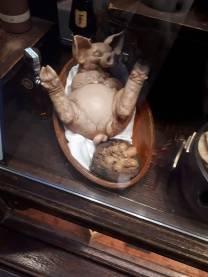 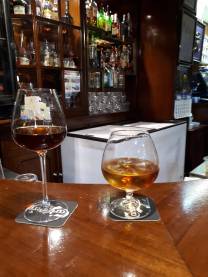 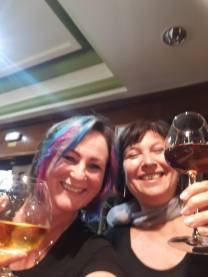 I would be ashamed of serving such cremated bits of bone, grizzle and microscopic amounts of meat. But apparently this is a delicacy in this region, and warrants the €22 euro. I hoovered up the over-priced patatas bravas instead. To aid Fiona’s digestion we went in search of a decent glass of brandy, which she got. Port they didn’t know, so I had a sherry instead.

After breakfast the next day we took the bus back to the train station to go to Madrid; a much warmer place indeed, and a great city, if you happen to like city life. Fiona had already spent a night there and had a handle on where to go. We had booked an arty Airbnb apartment at the back of the artist’s exhibition and working space, an interesting set-up. I had booked us a session at the Hammam, the Arabic baths, which we were in need of after exploring the area. I hadn’t walked so much in a long time.

We visited the grand Prado museum [https://www.museodelprado.es/en/visit-the-museum ], where we came eye to eye with Mona Lisa’s twin, painted simultaneously with the other original one, by a pupil of Da Vinci. And of course Hieronymus Bosch’s fantastical works and other old masters, too many to take in on one afternoon.

El Retiro is a big lush park, complete with man-made lake and boats. So we hired a boat and took to rowing a while. 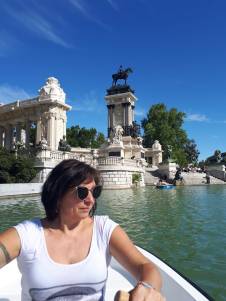 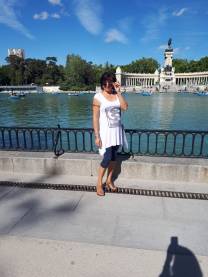 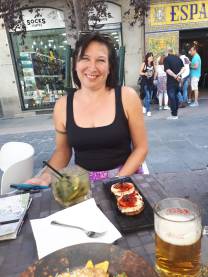 Somehow I didn’t get to see the Palace, even though we were as far as Plaza Mayor, next time. Instead we went to a street full of tapas bars and finally found a place with a really good selection of reasonably priced titbits. Every single bar was full of people and more waiting to come in. The metro system brings you anywhere in Madrid at any time of day or night, as is to be expected of the capitol of a major country. For me, being from Berlin, it is another city, full of people, traffic and noise and I yearned to go back to our quiet finca after these four days.

We then did the touristy thing for Barney, Nigel’s friend who came to stay with us for 5 days which includes our usual tour: El Rocio, Matalascanas and the beach, Mazagon and the yacht harbour with the little bar, the Donana National Park and Cristopher Columbuses ships. The same we did with Cordula, who came by bicycle from Malaga and went on to Sevilla.

In between we had some revellers from the ‘Transition’ festival, a week-long psychedelic and trance music festival [https://www.festicket.com/festivals/transition-festival/2019/] near Almonte. This has been going on for the past ten years already and young, and not-so-young descend on Almonte and disappear into the woods. From there they emerged in search of a good nights, or days, sleep away from the constant music. We hosted two DJ’s and other participants. [https://www.youtube.com/watch?v=rAYPMyb7Zpk]. 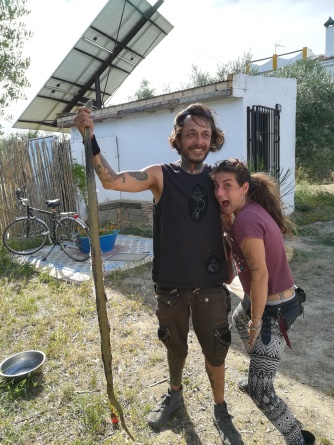 at the mazagon yacht club

2 thoughts on “Friendship, Fun and Festivals”