So I went to a bullfight, corrida de toros. Does that make me a bad person?

I was full of trepidation but also excited. I expected to be repulsed and to leave early, maybe after the first bull was killed. But I didn’t, I stayed till the end.

Every year, at the end of the Feria de San Pedro in Almonte the bull ring is erected in the Recinto Ganadero, just out of town, this is the place where a week before the horses from the Doñana National Park have been corralled. So the bull fight is the finale of the very important tradition starting with the ‘Saca de las Yeguas’, followed by the fiesta in the chaparral and culminating with the annual bull fight and the last day of the festivities. We could hear the noise from the feria and its many attractions and rides still at 4am. 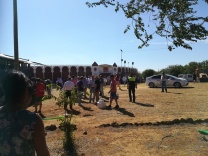 I make it my business to explore the country I live in and try to understand how the people tick. What has shaped them, what circumstances have brought them to this point in time? This includes the history of the country, which is very colourful and rich in Spain, religion, but also the climate, the influence of neighbouring cultures and how everything weaves together to generate the people and their specific culture and traditions.

So I gain an understanding and a love for these people that I have chosen to live with. That includes learning and experiencing customs, which may seem alien and illogical and are completely new to me.

The Spaniards are known worldwide for their joy in celebrating fiestas for any reason. Whole families or villages will group together to enjoy food, drink, song and customary dressing up. Every village has their own patron saint and their very own date to celebrate him or her, so if you want, you can attend a fiesta every day of the year. A lot of them are based on the catholic holy days, and if there are not enough, a few other ones are added. Even though few people attend church, veneration of saints is still a big thing and we have one of the major ones beside us in El Rocio, La Paloma Blanca. So we kind of are getting used to the hype around the statue and her importance in the yearly calendar and profit from it, as a lot of Spaniards will stay at Casa Halcon for the night to attend a meeting or celebration in El Rocio, which happens nearly every month.

Every town in Andalucia also has or had a bull ring. And if this edifice is not suitable anymore, then a temporary structure will be installed for the day as it is in Almonte. This seems to be the only fiesta where children are, fortunately, not brought along, it is an adults only event. Nevertheless is it a family day out, with big cooler boxes, picnic baskets, drinks and cushions brought along. I can only speak for Almonte, which is a small agricultural town, so these corridas in Sevilla or Madrid are probably a different affair. I was worried about the dress code, but here is was more relaxed, people not so much dressed up. We brought along our Spanish friend Teresa, but since her last corrida was ten years ago, she didn’t really know what to expect either. 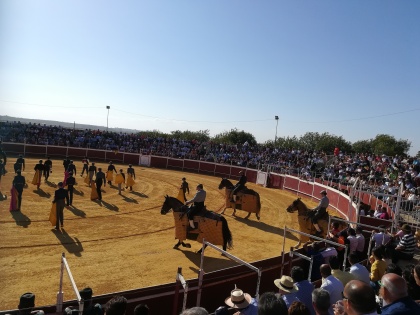 all the participants enter the ring

getting the horse ready picador

I was just looking up the calendar of toro (=bull) events, corridas, and there are two bull fights on every day in Pamplona! So the tradition of bull fights is well and truly alive in most of Spain. However, in Catalonia bull fighting is banned since 2011, but the Spanish court overruled this decision, deeming it to be more anti-spanish than pro-animal rights [see https://www.theguardian.com/world/2016/oct/20/spanish-court-overturns-catalonia-bullfighting-ban ].

In fact, bull fighting has already been practiced in pre-historic times, then the Greeks and Romans were at it and so it is still ongoing, also in Portugal, France and parts of South America.

We went an hour early to get good seats as the seats are not numbered, but still ended up, inexperienced as we are, with the sun shining fully at us, which made photo-taking a bit difficult. We should have known, as the rungs opposite us were already quite full, and they had the sun in their backs. Outside the ring the participating horses were warmed up and exercised. Beverages and snack and seat cushions were sold; it was a rather calm atmosphere.

the end of the bull

On the programme it stated six bulls and six bull fighters were involved. All participants in the ring are toreros, but only the matador will kill the bull, or that is the hope. It does seem a bit unfair, as there are at least five toreros involved, including the banderilleros, which assist the matador in the ring. They have pink capes, with which they attract the attention of the bull. The matador has two capes, both in red, one smaller than the other. The banderilleros start the performance, getting the bulls attention, then a picador arrived on horseback, the horse heavily cushioned against injury from the bulls horns, to apply a lance into the bull, but not piercing him too deep.  Then the banderillero will stick six banderillas, barbed darts, into the bulls back. I have not made myself knowledgeable about all aspects of the bull fight, but I suspect it has to do with bloodletting and aggravating the bull. So he is already weakened and mad. Then the ‘dance of death’ begins, with the banderilleros stepping in when the matador needs a break to change the cape or the sword. The bull just seems to concentrate on attacking the biggest target, the cape. But the matador or banderillero needs to read the bull, assess his strength, his next move because they are only inches away from his horns and hooves. So it is a skilled dance for life or death, only the bull having the disadvantage of being on his own with his instincts and the ever increasing blood loss. At some stage the matador will move to kill him with sword between his shoulders, puncturing the heart, as clean and swift as possible. To do that he needs to confront the animal, which is as dangerous and he needs to be able to assess if the toro is in an enough exhausted stage to not suddenly attack him. Sometimes this does not happen quite as it should, and the banderillero will deliver a coup de grâce, cutting the spinal cord of the bull with a broad bladed dagger, once the bull has gone to its knees.

We also got to see the spectacular performance of a picador, a matador on horseback. The awe-inspiring skill of the rider to keep the horse just an inch away from the bulls’ horns was unbelievable. The horse was unprotected, and if it goes down, the rider will go with it. The horse was agile and stepped backwards, sideways, danced his way around the bull. It is such an intense performance, that the horse was changed every ten minutes.

the matador and his child walking the ring

The matador will be rewarded for his skill and performance with one or two of the bull’s ears, which are cut off in the ring when he is dead. The picador, being such a skilled horse man, also received the tail of the bull. It is the spectators that decide by waving white kerchiefs what the matador will receive or if the bull is given pardon and can live.

The dead bull is removed by the ‘death squad’, a team of mules that drag the dead bull out of the ring. The bull is slaughtered in a mobile slaughterhouse on-site, and the meat sold to restaurants and butcher shops.

Then helpers rake the arena, covering over the blood.

Despite being born and reared in Berlin (West), the now capitol of Germany, I have worked and lived on a dairy farm for 13 years, I also lived and worked with sheep, I have been to slaughter factories (only once or maybe twice) and I eat meat. And I think anybody that eats meat should not be ignorant of the final journey an animal makes to become the meat on the plate. Death is part of life, but what I do not condone is ongoing suffering, the needless suffering of animals kept in conditions that are far removed from their natural habitat or confined to an extent that they cannot carry out their natural behaviours. And this is factory farming, where pigs and chickens are kept in cages all their lives indoors, pumped full of antibiotics to control disease, which will spread rapidly if living conditions are crowded and prevent the animal’s natural movements.

In a bull fight the animal, beast against man, is respected. And it had a very good life up to that point, pampered and pastured, fed with the best of grain, exercised and trained to become the star of a seemingly barbaric custom.

I have now experienced all of the fiestas that the Doñana area has to offer, and this was the final baptism, in blood. I won’t go again, but I will not judge or condemn the people that enjoy this spectacle, it is their tradition and culture, and as a blow-in I have to respect that.

One thought on “My First Bull Fight”