So what happens if you are in week five of the Corona-Virus lock-down?

Not much. Just some mundane things like your hair getting longer and greyer, your patience slowly running thin and you are trying to occupy yourself with keeping somewhat from shape-shifting into a doughnut with several methods. One of them is an iron-strong will not to snack after dinner; to cut out the chocolate bar after lunch; not to bake another delicious cake.

Although saying that, we are of course lucky as there is always some hard-core work do be done on a finca and in the garden.

Even painting the entrance can be counted as this, as holding a brush to painstakingly trace around and inside the lettering can be quiet strenuous.

We were just getting into the groove of cycling around the finca, Nigel even clocking up to 15 kms, when our first pony arrived on loan from our neighbour to eat the greenery.

Everything is now lush and quite overgrown, so cycling actually got a bit hairy. There is a riot of colour displayed, particularly after all the rain we have been getting. 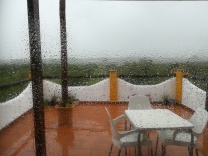 The daily work-out for Nigel is either handling the chainsaw to prune the trees or now expanding on the width and length of the future swimming-pool, which involves only hand-digging and bringing buckets full of clay, which is as hard as concrete, to the surface and depositing them along the fence line as barrier for the dogs.

I do some weeding, light digging if needs be and have taken up the Figure8 dance fitness (see https://bodyfx.tv/jaana-rhythms/), an online course to get me sweating and rediscovering my waistline, some day. The daily 45 minute workout leaves me aching and tired, so it must be doing something. It’s based on mostly Latin dance moves, which I am familiar with, and some high-octane Jive or Charleston.

We also harvested our first potatoes. The stalks got hit by blight, a fungal disease and so Nigel dug them up to rescue the spuds underneath. They are nice, some very small but edible. He has planted some more now.

Nigel also built a rocket burner, an emergency stove for outside, and it works a treat. Within 20 minutes we had a lentil stew bubbling away on it.

How do we feel about the increasing length of this quarantine?

Nigel’s life really hasn’t changed that much, as he prefers to be at home on the finca and keeping himself busy. It has more an impact on me as so far I don’t have to handle phone calls and online inquiries from potential guests. It makes me feel a bit surplus to requirements even though I have no problem keeping occupied. There is always the blog, the website development, continuous Spanish learning, gardening, baking, cooking, etc.

And yet I object to the curtailment of the freedom of movement, I think it goes too far. By all means protect the vulnerable and make protective gear available to all that come in contact with the elderly and already sick persons. Maybe I underestimate the dangerousness of this virus, but since we are not given the comparative figures of ‘normal’ death rates and a correlation between real Corona victims and percentage of population, the reported figures are skewed. And any scientist or doctor who says so is not given credit or newsworthiness. I have heard of such physicians that have been bullied and threatened. We are as a populous governed by fear. Only fear will really keep us in check, this has always been the best method of controlling citizens. Look to any dictatorship, the third Reich under Hitler or the Mafia stranglehold on life in Italy and other countries. What happens now, in the whole world, without questions asked, is without precedence. It makes me wonder.

Anyway, we just have to get on with it and I say this again, we are one of the privileged, as we have an income and very few bills to pay. Like all owners of supermarkets, tobacconists, pharmacies, food stores, veterinarians, farmers and field workers our life keeps going on much as it was before, minus the guests and their money.

So this virus is selective in its impact on the livelihood of people. Some will receive government help; others will fall through the cracks. A lot of businesses will close for good and we don’t know the economic outfall of it all yet.

When all this overwhelms me I try to concentrate on the positive side, because every evil has some good, nothing is black & white. So the reporting of wild things coming out to play, like goats in a town in Wales, an Orca whale in the harbour in Mazagon (only 45 minutes from here), a wild boar in Barcelona, a panda in Hong Kong Zoo finally falling pregnant as a result of no Zoo visitors, and less traffic on the roads is good news for hedgehogs and badgers.

Not to forget that air pollution has reduced dramatically, for the first time people in China’s metropolis can see blue skies, even seismologists report lower vibrations from “cultural noise” than before the pandemic. And little or no airplanes in the skies, even Gretta Thunberg couldn’t foresee that her wish would come true so soon.

We added to our family, as our cat Shadow gave birth to five kittens, three of them male. She was originally given to me as a male, but when our Jack became interested in him/her, we realised it is a she. Life happens. 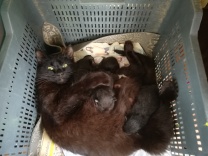 On the olive pruning side of things, we tried the grafting method which our neighbours employ to rejuvenate a branch that was cut as it lost the vigour to produce olives. When an old arm is cut off, new growth will sprout as in photo 1. Too many sprigs and you have then to select which ones to keep. Instead you can take a sprig from a strong, vigorous olive tree, another type even, and slip the prepared sprig into the outer layer, where it will take root. To keep the site moist and prevent other suckers forming, damp clay is used to close off the cut and an old bag wrapped around the outside to keep it in place.

you don’t want this 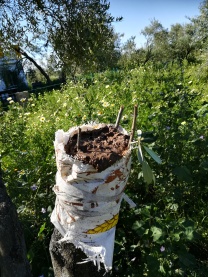 I have been trying out more no-gluten recipes.

One of them from Glutenfree-on-a-shoestring is called Japanese Milk Bread and came out very well; so well in fact, that the yeast dough flowed all over the bed, where I had it sitting in the warm sunshine for an hour. I had so much dough that I also made a bap that was delicious eaten warm. It’s light, fluffy yellow bread, good for jam and sweet spreads. I added sesame seed to the recipe. 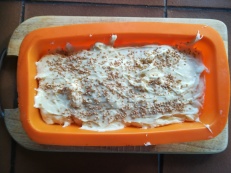 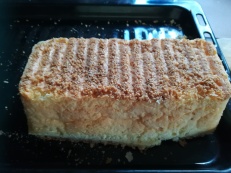 See the recipe at:

I substituted the cream of tartar with more vinegar, the butter with sunflower oil and left out the xanthan gum. The flour mix was from a supermarket, it still worked well.

The other new item on the menu is a tortillita, made with equal amount of rice and chickpea flour mixed with cold water and any nice additions like onion, prawns or anchovies or anything you like, even parmesan or cauliflower.

Here is the basic recipe for 2 pers: 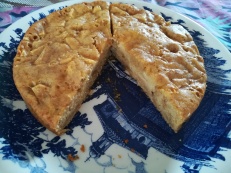 The Apple Cake, also glutenfree, transformed into a Birthday cake for my daughter Elaine. Unfortunately we had to eat it ourselves as she could not be with us as planned thanks to the dam*!?x/&#  virus.