The Garden in Winter

I have been gearing up to get an early start on growing veg and bought seed packets. These indicate sowing times, but for what region in Spain? The climate varies widely so I also ask the shopkeeper and watched the plants on sale for a clue. We bought some strawberry plants that are doing really well, the first strawberries are already blushing in the warm midday sun. However, I sowed tomatoes and put them under the cold-frame until they were big enough for planting out. Everything went ok until the frost eventually killed them. And honestly, they were struggling through the cold nights. The spinach is doing well and even the pepper plants are still alive and producing. The cauliflower and broccoli are growing well and last year’s broccoli is also still producing. Last year’s fennel has come back and looks pretty even if it doesn’t have big bulbs, the leaves are tasty.

January and February are the main winter months, even as day light and sunshine hours are increasing. The frosty nights hamper real growth. I tried to buy a fleece to cover tender plants but all they have here is protection against the sun, heavy shading fabric. So I will need to look online.

My other experiment is a home-made weed-killer from strong vinegar (Mercadona has an 8% cleaning vinegar), salt and washing up liquid. I sprayed that onto the ‘non-welcome’ plants in the stone circle and within 2 hours the leaves were dead! Success! I am not sure how long this will last as I doubt it kills the roots, but even though, it still helps. 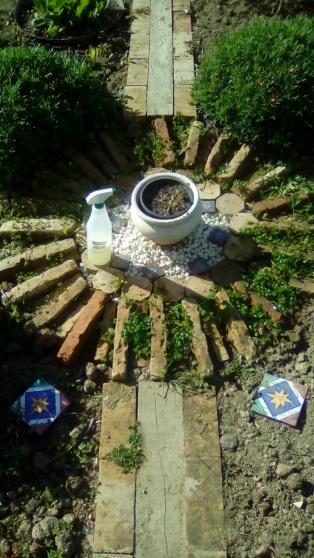 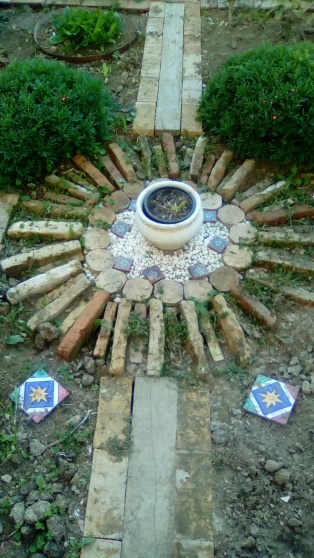 The garden is now also fenced against scratching hens and digging dogs. We are now proud owners of a giant Mastin, Sofie, and a tiny terrier stray, Drops. She dropped by one day, all skin and bones and wary but devoured all food that we gave her and disappeared again. About a week later she was back, doing the same and stayed for the day, to Sofie’s delight. Sofie, being only a little over a year old, wants to play and run around, but Drops did not have the energy. She was gone again but eventually came back to our delight. She has got stronger, more confident in herself, found her bark and now plays with Sofie. I never was a dog person but she stole my heart and is very happy to see me. She seems also more obedient than Sofie, who still has the habit of trying to get out the gate and disappear for a few hours at a time. It is impossible to catch her as she knows full well she will be tied up, at least for a day. 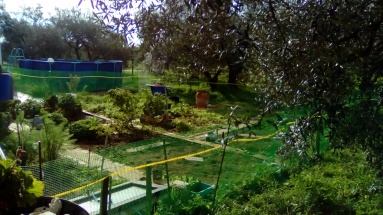 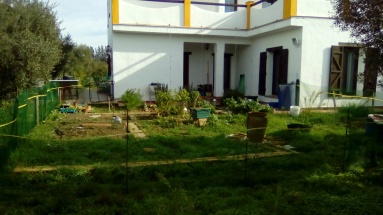 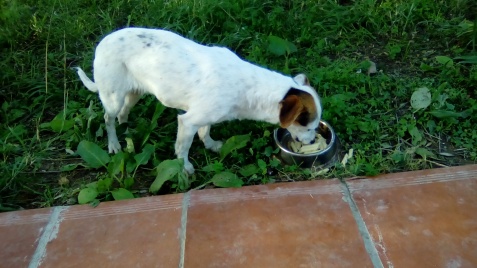 We still have plenty of guests, from Germany to Sweden to Switzerland and Canada. Some bring motorbikes, some bikes, some dogs and some both.

The night before my children arrived we celebrated New Years Eve with a bunch of really nice Spanish, that came all the way from Jaen-Ubeda direction. This was the family of our house angel Sara. The tradition is to eat 12 grapes when the clock chimes 12 times; one grape for each month of the New Year. I tried but couldn’t get them all down so quickly, so I must practice for the next time. 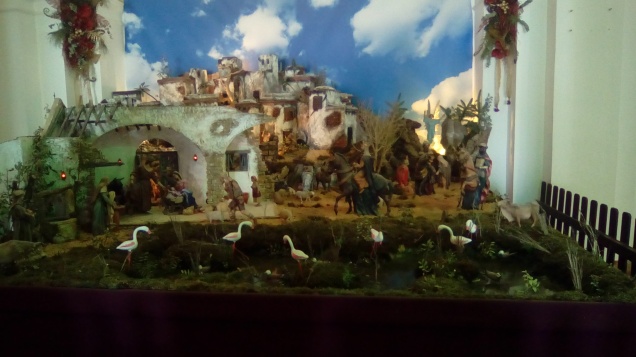 2019 started wonderful. My two children, Elaine and Frank, were here for the first time and needed some TLC, because they brought with them colds and sniffles. And the sunshine did them the world good. 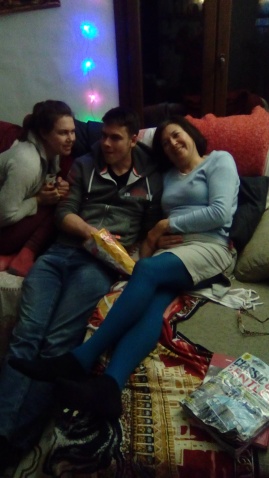 We only had two full days together, but better than no time. 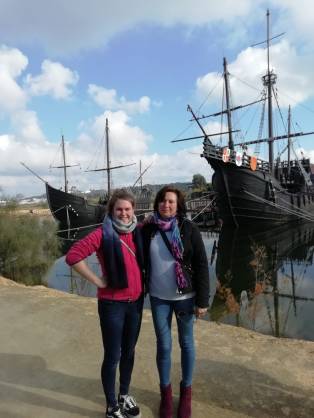 It’s the Three Kings where it’s at. This turns out to be a bigger deal then Santa because there are three of them bringing presents and literally tonnes of sweets. 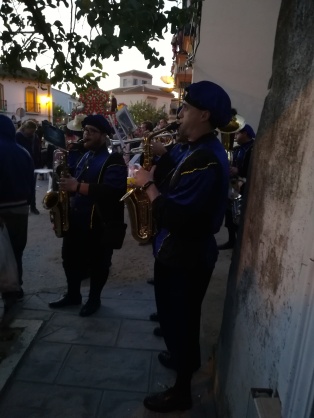 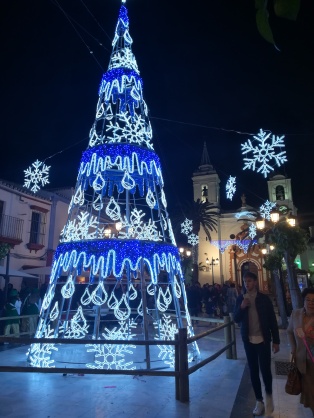 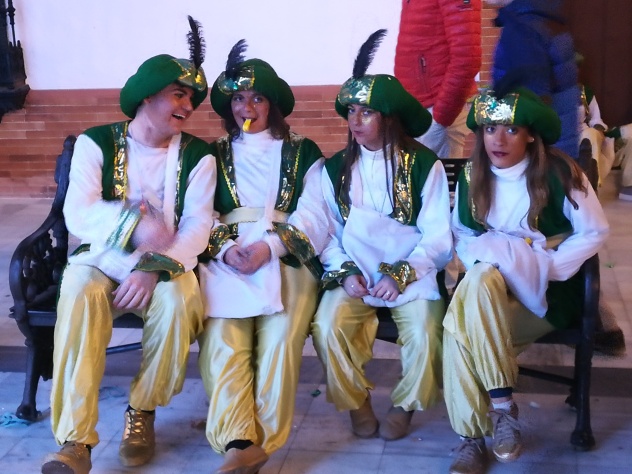 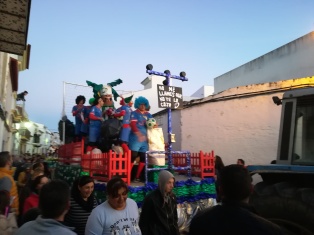 Epiphany is the coming of the three wise kings, mages or whatever they were to welcome Jesus and bring him presents of myrrh, gold and incense.  Nappies and a hot soup for Mary would have been more useful. But for the children in Spain this is when they receive their presents at home and on the streets. We were invited to come along to our neighbour farmer’s family and witness the carnival-like atmosphere in our small town of Almonte. The streets were full of people, old and young, lining up to watch the procession of tractor-drawn floats of colourful dressed-up people, throwing sweets and toys. So that’s why some came equipped with plastic bags to bring home their stash of sweets. 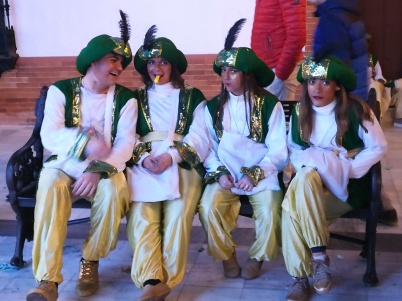 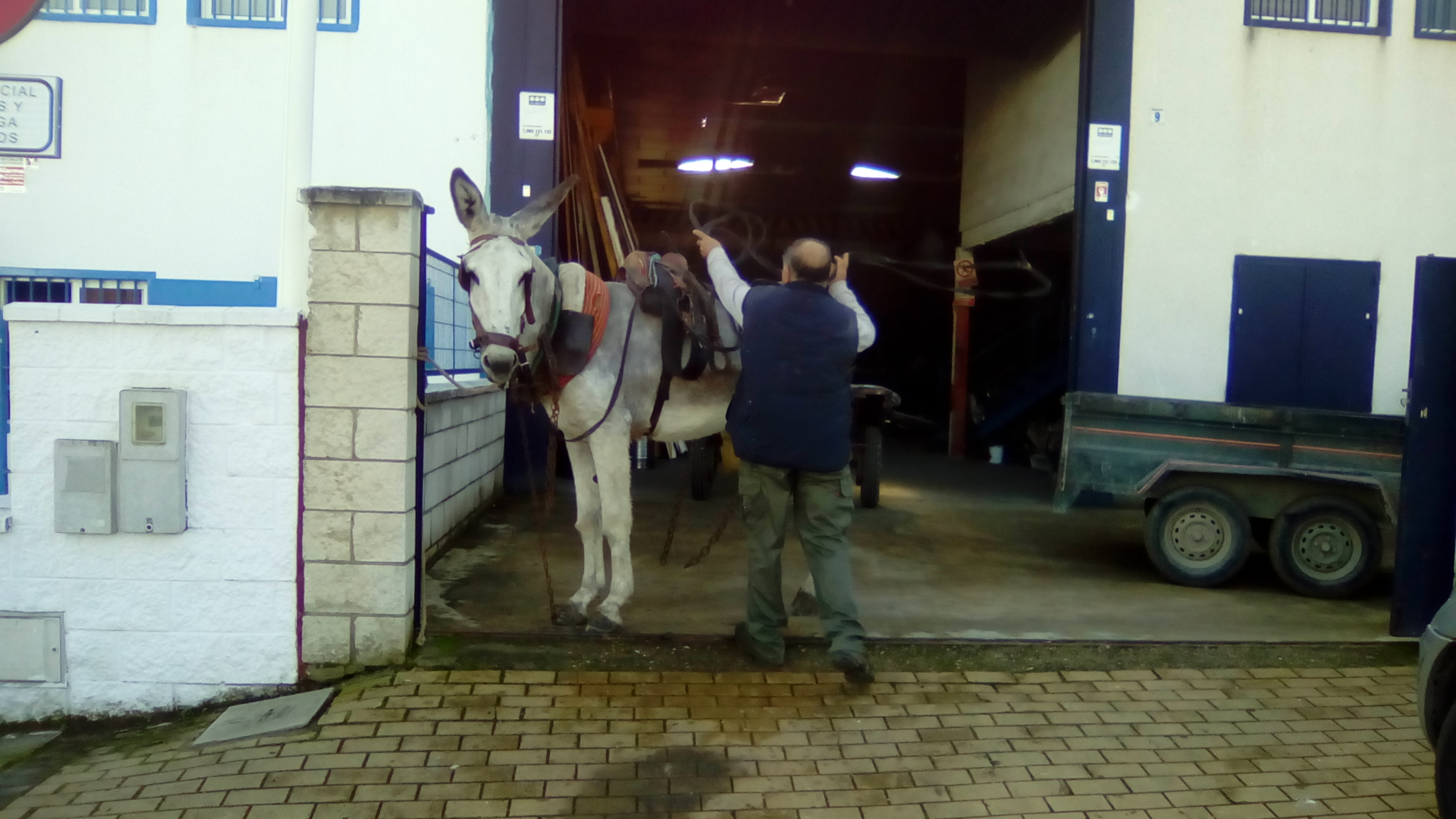 We went for a flying visit (literally) to Ireland to conduct some urgent business. And to collect post which has been sitting there for months. It was no surprise that it was raining for the whole duration, which was 5 days, including the travel days. So we ended up with a miserable cold to bring back to Spain.

It also rains in Spain. Lots. Since October we had more than our share as TV and newspaper reports attested, for example according to ‘The Watchers’ https://watchers.news/2018/10/18/extreme-rainfall-deadly-flood-potential-spain-october-2018/ :
“Extreme weather conditions are expected across the IberianPeninsula and the Balearic Islands from October 18 – 21, 2018. The event follows devastating floods that claimed 13 lives in Mallorca and another 13 in neighboring France over the past couple of days. There is a potential for similar rainfall totals and extremely dangerous weather situation.

Spain’s national weather agency (AEMET) issued Red rain alerts for Castellón and Terruel, Orange for the Balearic Islands, Alicante, Valencia, and Tarragona, and Yellow for 11 other neighboring provinces. The weather front is expected to arrive on October 18 and continue affecting the region through Sunday, October 21 plunging Spain into the worst ‘gota fria,’ a Spanish term meaning ‘cold drop’ that explains a sudden drop in temperature, in a decade.”

Average monthly precipitation in October from AEMET (Agencia Estatal DeMeteorologia, Gobierno de España) state for Huelva 5 days of rain with an average of 56 mm. When I looked at the actually rainy days in October to December this year for Sevilla, I saw that we had no rain the first week in October and then daily heavy downpours, with 27.5 mm in one day alone and 230 mm in total for October! Of course we are not the only ones that suffered unprecedented amounts of rainfall. 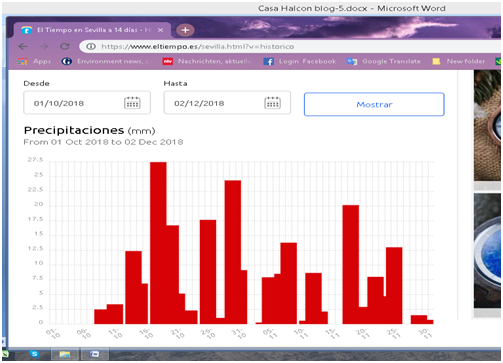 The result of all the rain is that I swapped slugs for snails here in Spain and there are just the same pain!

So I declared war because my gardening here is still trial and error as I get used to the new soil, climate and site specific conditions. Tomatoes with sunburn, shrivelled peppers and rock-hard aubergines being some results.

I have tried the beer trap, but it would take a whole beer barrel to keep the snails away from all plots. My cold frame has a beer trap in it and so far no snails have come near my little ones. 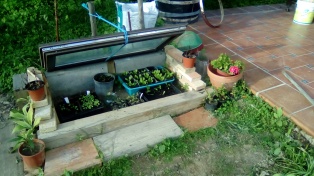 I have cut up plastic drink bottles to act as cloches, but they just climb in, the slimy pests! Online I got my best weapon yet, a roll of copper band that sticks onto surfaces, so all pots and cloches are prepared with the metal barrier. When they crawl over it they receive an uncomfortable electrical charge, so they stay well away from it. 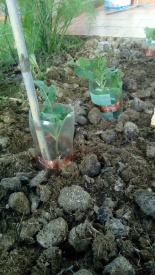 I prefer barrier methods to poison, which always will have some impact on either the soil or some innocent organisms.

Therefore I also use fly food covers as barrier and safe nursery for my baby spinach plants. 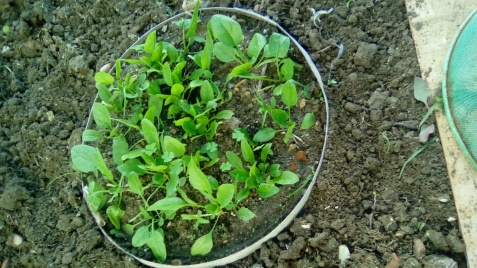